Check Availability | Call for Quote | Location
Bridge building on the banks of the River Sence will test all the groups skills of coordination, ingenuity and planning. A great activity for any group with loads of laughs guaranteed
Enquire About This
[Click On Images to View Gallery] 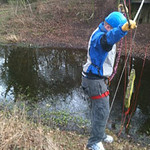 Well here we have a fun group based activity that is sure to be a huge hit with all your mates during your Birmingham stag weekend. Bridge building involves working together as a team, DIY skills, listening to each other and dishing out a good slap across the back of the head when someone does something stupid. If you want something fun, different and group based then this is perfect for you.

Now you are not expected to build a new bridge over the motorway or anything like that, what you are expected to do here is work as a team with your mates and come up with some plans on how to build a bridge on the banks of the River Sence. Now this is not just a bridge for show. You guys have to actually build a bridge that is going to take all of your weight and keep you out of the water! The people who run this are awesome and will make sure that you boys all get into it and have a great laugh. There are two things you should expect to happen here. Number 1 is that you guys are going to have a lot of laughs and do some grade A piss taking and number 2 is that 99/100 someone’s ass ends up in the river!

When you arrive you will be greeted by the staff who will waste no time in letting you boys know just how your bridge building adventure is going to play out. Everyone is friendly and they will make sure that you  know what is going to be happening. They will give you a ton of stuff and that my friends is going to be what you are making your bridge from!

Once you have all your gear it is up to you guys to look at it and come up with some sort of plan on how you are going to build this bridge. Now this is a Birmingham stag weekend so chances are a few of you will be a little bit tipsy from the night before, but try your best to think before you act because just grabbing stuff and starting to build like you are a nine year old with Lego (actually a 9 year old with some Lego would probably be a pretty damn big help here) will see your bridge fail! You guys will need to stop and think about what you are going to do. Do any of you actually have any DIY skill? Are some of your strong who can do all the grunt work? And who is just bloody useless and should be kept out of the way? You need to think about everyone’s strengths and weaknesses and use them to build your bridge because if you not you will DIE……… Ok so you won’t actually die, but you will probably get pretty wet.

Now the staff will be on hand to offer little bits of advice here and there, but for the most part you boys are on your own! The bridge that you build will have to be able to take your weight and it will also have to meet certain “safety” specifications as well! If you have planned well enough and built your bridge well, you will have a nice photo of you all standing on it at the end of the day…… if you have not well you will still have a photo, but probably of you guys in the river. This is a fantastic Birmingham stag day idea and the type of activity that when you are in the pub later you will all be discussing how you could have done things differently and just having a great time talking about what a crazy day it has been.!

Here is the “down low” as the cool kids say about this fun, bridge building activity in Birmingham.

How Long Does It Last: This is about a 90 minute activity from start to finish, but this is one of those thigs where the time just fly’s by! Make sure you guys are there at least 15 minutes before you are booked in.

What About The Weather: Well as this is by the river if it is pissing down with rain, snowing or really harsh winds then this activity will not run. I mean last thing we need is one of you guys floating down the River Sence.

How Many People Can Do This? Hmmm now they do say that you need to have a minimum of 4 stags with a maximum of 9, but if you do have slightly more, then see if they can work out a deal where you compete against each other in two groups.