Check Availability | Call for Quote | Location
Get to challenge the lads and come out the winner - will you succeed on the bouncy pony or will you be the sumo champion (That's a game for the night as well ;-))?
Enquire About This
[Click On Images to View Gallery] 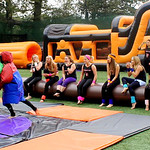 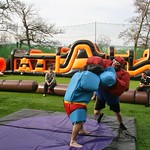 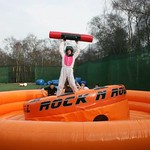 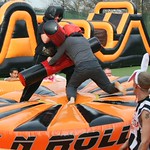 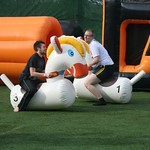 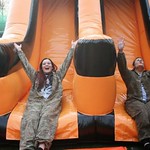 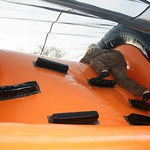 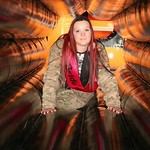 Look I know that to some the term, inflatable assault course may sound like something you would take a bunch of six year olds all hyped up on Pepsi to play on, but this is actually one of the most fun, crazy and memorable Birmingham stag day ideas that you boys can do. This ticks all the boxes of what makes for a fun, stag activity. We are talking over the top action, assault with a deadly weapon (well inflatable weapon), an actual competitive game and just in general a day full of laughs.

You can expect to be absolutely bloody knackered by the end of your day here, but you can also expect to have had the time for your lives and to be talking about this in the pub for hours after! In all honesty the thing to expect here is……. Expect the unexpected (10 cool points if you know what early 90’s cartoon that is from) as this is an activity where the rule book is thrown out of the window and anything goes. The “games” or if you prefer “events” that you will be doing are all freaking nuts, but a hell of a lot of fun.

What will happen here when you arrive is that you gents will be filled in on what you are going to be getting up to today. While this is called the inflatable assault course this is actually more of an “inflatable Olympics” as you guys will be taking each other on in five different events. At the end of the day the results will be all counted up and we will have a clear cut winner…..  and that man is no normal man he will be a god among men!

The different games you will be taking part in are all a lot of fun and right here is the order that you will be doing these events in the first four are all competitive, but the last one sees you working as a team. Assault Course, is what you will be starting with. This is a really rough and crazy assault course that as it is inflatable you would think makes it easier, but it sure as hell does not….. especially if you are nursing a mean hangover. Rocca Rolla is an event that is kind of like Gladiators where you hit each other with an inflatable joust as you try to knock each other off this wobbly base. Super Hero Wrestling, will see you guys get dressed up in big inflatable suits, inflatable gloves and then you get to just go to town on each other….. last man standing (or alive) is the winner!

Pony Racing, will see you boys on these space hoppers that have been made to look like pony’s. This is just a flat our race where you have to bounce like a maniac all the way to the finish line! The last event is the Wobbly Sausage Race which will see you guys working as a team to get the sausage to the end of the race without dropping it……. Dropping it is an offence that must result in a severe beating!

While there is a competitive element to this day it is still just all about having a great laugh and no matter if you win every game or suck more than a Dyson, you will still have a great laugh here.

To save you guys showing up here and looking like weirdos here is a little guide about having a fun day at this inflatable assault course.

Clothing: Comfortable clothing is the key here. On a nice summer day you cannot go wrong with just shorts and a vest as you will get red hot and sweaty doing this! Just wear whatever you are comfortable in, but just be sure to know that this is a pretty physical day.

How Long Does It Last?: In all you are looking at around an hour to an hour and  half for your day of craziness to come to an end here. This is the kind of activity where you arrive, raise hell then head to the pub.

What About The Weather?: This is certainly more of a “good weather” type of day out. I mean I guess you could do it if it was raining a little bit, but heavy rain, wind and of course snow will most likely see in this Birmingham stag weekend favourite not running.

How Many People Can Do This?: Some events here are one on one where as others will see a few lads going at once. They do ask that there is a minimum of eight people, but this probably could be worked around.