Check Availability | Call for Quote | Location
Why does everyone love paintball shooting? Perhaps its because you get that rare opportunity to shoot that geeky friend of the Stag right between the eyes!
Enquire About This
[Click On Images to View Gallery] 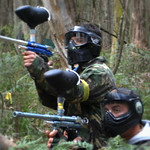 Time and again Stags insist on paintball shooting as part of their Stag Do in York. Paintballing is one of those activities that everyone can do and that appeals to that neanderthal male pysche of killing your enemy. Ok so paintballing is only about firing a harmless paintball but it still counts as a KILL!

Paintballing is an all action shoot-em up style of activity. At times you will be defending and other times attacking. Sometimes you may even be sacrificed by your team as a decoy. The games vary but almost always include classics like Black Hawk Down or Omaha Beach landing

The centre has all the best equipment and the enthusiastic marshalls will ensure fair play as best they can. However a sneaky wee shot at the marshalls themselves is not allowed ( providing you don't get caught!) Additional paintballs can be bought at the site after the initial 100 balls are used up.

We suggest that you wear old clothes and trainers as the site can get muddy and especially if you are wriggling through the undergrowth hoping to take out the enemy.