I was hesitant about throwing a stag night in York at first, but this is actually a pretty damn cool place. You see, once you’re done with the amazing daytime activities, York actually has one hell of an underrated nightlife. You guys will have a blast here with all the different clubs, bars, naked chicks and places to catch live music. You never know what a night in York is going to throw your way! 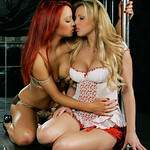 £ 9.99
This is the best lap dancing Club In York- Stag - you have to come here - best birds by far. Classy joint with international acts 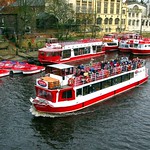 £ 34.99
Evening Party Boat in York. What a great way to start any party evening off with this Floodlit Cruise with barbecue style buffet and professional disco. 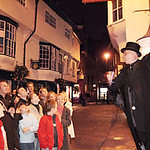 £ 9.99
Frighteningly good walking tour round the medieval ghostly haunts of ancient York. Tales of murder, blood and gore will abound- just like your Stag Night in York 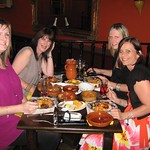 £ 19.95
This Authentic Spanish Tapas bar & restaurant not only serves great food but as a bonus is right in the heart of York's hectic bar and nightclub district. 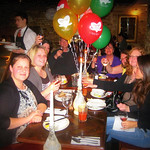 £ 17.99
A favourite with Stags in York is this great Italian restaurant conveniently close to York Minster. Great food, great service, great location for all of Yorks nightlife. 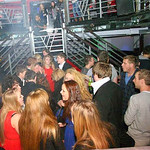 £ 7.99
The smart Stag Night organiser will organise Guest List Entry to York's Tokyo nightclub. Straight in to the bars & dance floor so the party doesn't miss a beat.

Here I have for you six activities. You might fancy just one… or maybe three… or hell, you might even try and do all six! Anyway, you’ll have a fantastic York stag night.

I’m not talking about the mental Japanese city when I say Tokyo! Nope, I’m talking about one of the most badass nightclubs in York.  This is the kind of club where many stag parties (and hen parties as well) will end up at some point during their night! This is just a really cool club that offers different areas to dance and party in, more than a few bars and many, many local ladies who love to get down and dirty here! Take your night here even further by getting on the guest list and avoiding that huge queue outside.

You may have seen the Texas Chainsaw Massacre ten times, you may have laughed your way through Hell Raiser, but nothing can prepare you for this Ghost Walk. I am a bit of a hard core horror nut and so are a few of my mates who accompanied me here, but holy crap is this scary. At first I thought it was cheesy as we started to go on our walk, but the guide who started off all nice got real sinister and in-depth in his descriptions of why these places were so haunted. This was a great way to spend an hour and I sure as hell needed a whisky after it was done.

See some nice round butts, lovely firm racks and smiles that could melt ice, here at the Upstairs Gentleman's Club. Man, the ladies that were on show here were just amazing, and some of the acrobatics and positions I was seeing on the stage were blowing my mind and making me close to blowing my… money on tips! Now get your dirty minds out of the gutter! This was a great night and we used this as our end point of the night and it worked out perfectly. I just got a really classy, VIP feeling the whole time I was in here.

Pubs and clubs are cool, but if you guys want to kick things up a few notches and do something very memorable, then get on board the York Party Boat. This is a really cool way to spend some time before you hit up a nightclub or maybe even a few bars! Drinking on a boat is really hard to describe, but let me tell you there is just something that is so damn awesome about having a few beers with your mates on a boat under the stars.

I love a nightclub that goes above and beyond in coming up with bizarre, mental and above all else fun theme nights, and that is what you get at Flares.  This is a club that is not pretentious or trying to be something that it is not. This is just all about getting people through the doors and wowing them with a great club night! If your stag group is the type that loves to hang around with other people (hen parties in particular), then you will have a fantastic night here at Flares. No matter what time of the year your stag group rolls into York I would bet that there is some kind of wild and nutty theme night going down here.

Here in the UK we have a lack of really great sports bars. Well, York has you covered with the awesome Loops Sports Bar. This is a really cool bar, and as you would expect from a sports bar there are TVs all over the place, tonnes of food and a great bar! This is a good place to come early on the Saturday evening of your stag weekend, especially if there is some Saturday night football going on. While you will not spend the whole night here, for a few warm-up drinks this bar is just perfect.

That is not all – I have some extra York stag night ideas for you!

Here are some more amazing York stag night activities for you to check out...

First up, I have another lap dancing club for you. Actually The Black Orchid classes itself as a gentleman’s club and whisky lounge. I will admit that I have no clue what a whisky lounge is, but I did have a great night here. They do offer some very old and expensive whisky, if that’s your type of thing, but the bar also has plenty of beer and other types of booze for you guys. The ladies here are amazing and the ones I ‘dealt’ with were a lot of fun and seemed to be having a great time, which then makes you have an even better time!

A place called Pop World on a stag night… am I high? No, I am not. You see, Pop World is just an incredible place for a fun night. It’s kind of weird and kooky, but Pop World just oozes charm! I got a few grumbles when I told my group we were going here, but after a while they were sold. Not only is this a really fun club, but chicks seem to freaking love this place! I swear, out of all the places I went to in York, this was the only one where the ladies greatly outnumbered the guys.

I know this one may take a bit of selling, but The Basement is a live music stag show and arts venue where they have live entertainment every night. This is a really weird place and some of the stuff they have on the stage is sure as hell not for everyone, but they do have comedy shows on the stage, some live bands and some stag shows that after a few beers are really fun. I know that this is not for everyone, but if you do want something different and a little out of the ordinary during your York stag night, then see what is playing here.

Lastly I have a place that is just perfect to kick off your York stag night the right way. Castle Snooker Club offers you snooker, pool and American-style pool as well. It’s a really cool and laid back place to have a few drinks, maybe even something to eat and just get in the right mood for hitting the bars and the nightclubs later in the evening. It may seem like a strange choice for a stag night, but a few games of pool, a couple of beers and maybe even a burger will get your stag night started the right way.

The low down on York… You know, I have no clue what low down actually means!

Eating with manners (eating in a nice restaurant)

A stag night is the perfect time to put on some nice clothes and eat in a nice restaurant that you normally would never eat in. The Park Restaurant is so high class that I was sure I was going to be asked to leave! They have a good menu here and offer three courses and a great wine list as well. For a fine (almost too fine!) dining experience, this place is just perfect.

If you just want to get the best bang for your buck when it comes to food, then the best place for you guys is the Gourmet Burger Kitchen. I am something of a burger connoisseur, and this place was amazing! From plain burgers to burgers so big you will get lock jaw, you guys will get some amazing food here at a very reasonable price.

Getting a late night taxi in York

If your hour is up and you need a taxi in the wee hours to take your lady of the night home, then do not worry as Fleetways Taxis and 659 Taxis are just two of the 24/7 taxi firms that are in York.

Us guys tend to do what we think are awesome things when we are drunk, but at least half the time this results in someone ending up in the hospital. But if you do have a mate who is a bit of a moron (or if you are the moron) who gets hurt, then The York Hospital will patch you up and send you on your way.

York has a few places to catch some good music, which is always cool for a stag night. Fibbers is the most famous music venue in York and doesn’t cater to just one style. They have indie, hard rock and even dance music DJ’s playing here as well. The Duchess is a really cool venue, and when we went there they had the band kind of in the middle of the floor and everyone around them. It’s just a really ‘hip’ place to catch a live gig.

Chilling out to the max

For you guys who are more laid back and want to find a place to chill a little bit (even if it’s just for an hour), then Evil Eye Lounge is a place I highly recommend. This is a wine bar and Asian restaurant… Who thought of mixing these two things I have no freaking idea, but it works, and the result is a really cool and laid back place.